The majority of people, in my humble opinion, stand on either two sides on how they view social media: essential or futile.  Now don’t get me wrong, I am one of those who like to think that I am on both sides, depending on the context, but there is always a force pulling me closer to one side than the other.  I bet it’s the same side that you’re on, considering you taking a graduate-level EdTech class, however, I may be a bit presumptuous in saying that.  I’ll let you linger on your chosen side for now.

I viewed the Netflix documentary The Social Dilemma a few months ago when it was first brought to my attention by a classmate and Twitter colleague, Nancy.  Although I was familiar with the addictive nature of social media, this film brought to light some other areas of its development and nature to which it breeds what Tristan Harris, a co-founder of the Center for Humane Technology and former Google “design ethicist”, terms a “digital pacifier” dependency.  In addition, consumerism and commercialization is a building block for the development of apps.  Harris goes on to explain that, “If you’re not paying for the product, you are the product.”  Shoshana Zuboff, a social psychologist and Harvard professor, adds to this by stating that social media has become a vehicle for “surveillance capitalism”.  Mass surveillance of online activities allows for the sale of personal data to companies who have focused on ways to “deploy user data in order to keep people online longer, thus guaranteeing more views for paid advertisers.”  The algorithms used to gather data identify and target a user’s interests and this, unfortunately, only exposes them to more narrow viewpoints, especially for those who are unaware of this configuration.

However, the more we educate people, the more we can see the benefits of social media platforms.   Although informative with some shockingly accurate facts, this documentary takes on a fear-mongering approach which blinds viewers to the potential benefits of social media.  If used purposefully, which I admit, can be loosely defined, I would love to see a documentary that spotlights the positive impact that social media has had and can have on society.

Side note, interestingly enough, as this article states, “It [Social Dilemma] nobly asks us to stay alert and to monitor our own, parasitic relationships with the apps that keep us connected, but it also innately feeds the algorithmic beast with its presence on Netflix.”  A bit hypocritical?

Before I get to the specific positives and negatives that social media has in our schools and society, the real reason for this post, I wanted to bring your attention to another documentary titled Screened Out.  Although I have not viewed it myself, I stumbled upon it after looking up some reviews on The Social Dilemma as it is closely compared to the amount of time we spend on our devices due to their addictive algorithms.  It explores how “social media, smartphones, tablets and a range of platforms and devices have fundamentally changed the way we communicate and operate in the world.”

If you have viewed this film, I’d love to hear your thoughts on it.

Okay, now for the meat and potatoes of this post.  I have gleaned some insights from the plethora of research that I did using my device since it gives me up to date information from many perspectives.  Interesting tool, isn’t it?

1. BYOD – Bring Your Own Device

Now that cellphones are in the hands of our youth at younger ages and schools have difficulties keeping technology updated or have enough for each student (a huge costs), educators are asking students to BYOD for activities.  Ironically, this relates to the constant battle of cell phone usage in schools, especially elementary, as they aren’t 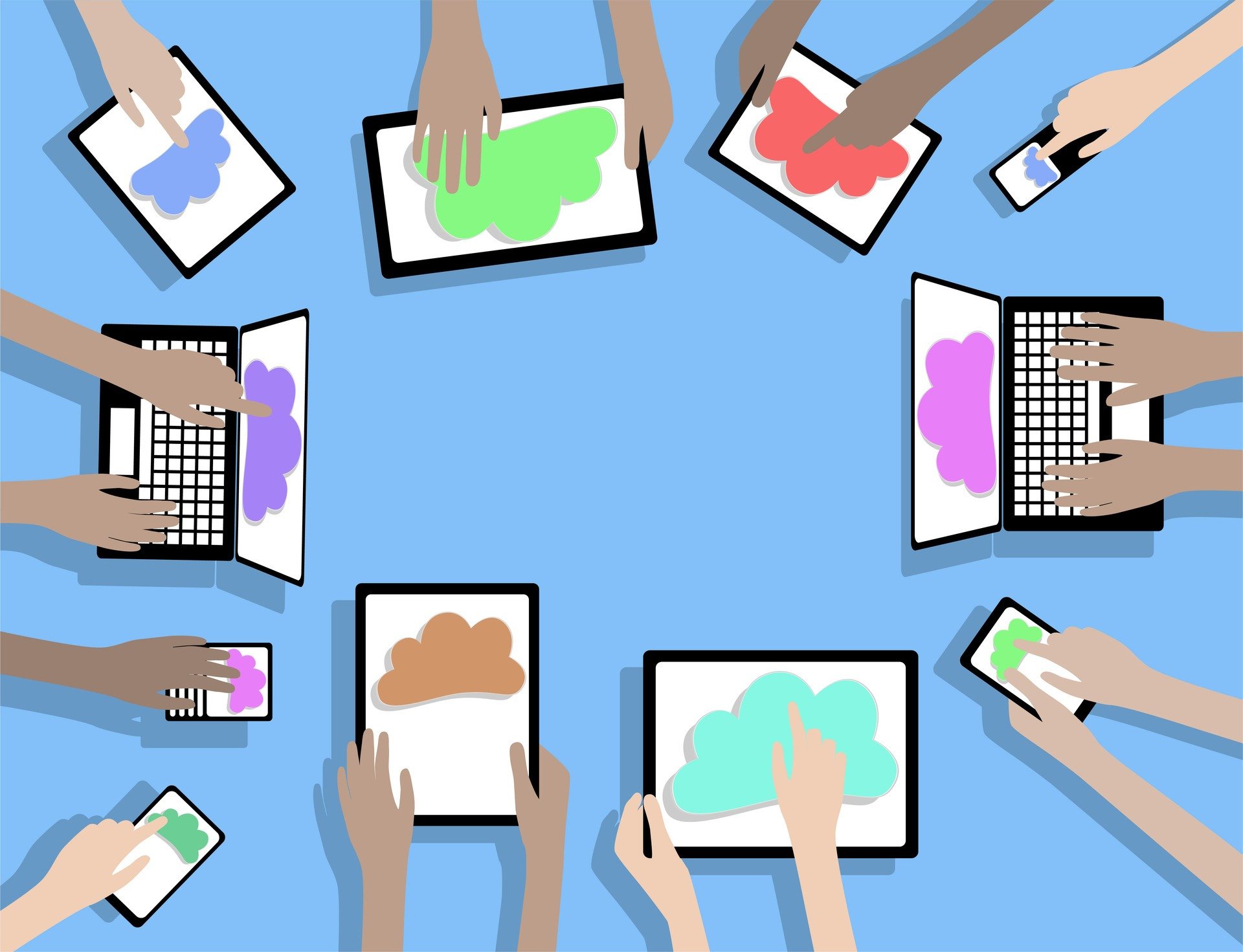 often used for intentional educational purposes.  However, BYOD is a way to meet students in the middle.  They already have their phone at school, likely in their hands or at least nearby, so why not use them purposefully by engaging them encouraging ad increasing student participation while expanding the curriculum. Unfortunately, not all students have access to devices to partake in these initiatives, albeit used with good intentions.  Does this create a negative social situation for some and highlight the disadvantage they are in?  Does this put social pressures on students to go against parent guidelines already in place? Or, does this create an environment to allow all students access to technology in the classroom for those that can bring their devices?  The controversy continues and always will.

I would love to hear your experiences with using a BYOD approach as I have never used it myself.

Yes, I am using terms that are familiar to most youth, but perhaps not to parents/educators.  Out of social media has come the practice of having more than one account on a platform.  Upon learning in other EdTech classes, I realized that I am one of those who have several accounts for specific purposes, usually work and personal.

However, kids have a couple accounts on the same platforms to showcase their “fake side” known as a Rinsta account (real + insta = rinsta).  This one is usually made public and showcases only “positive” things in their life.   The other account is used to display their “real side” known as a Finsta account (fake + insta = finsta).  This one is usually shared with close friends/family who they feel safe to be themselves around without judgement.  No, I didn’t get those mixed up, the fake account is their real self.  I know, it doesn’t make sense to me either.  Either way, this particular app breeds a FOMO (fear of missing out) mentality as it feeds into social approval with likes, views, and comments, much like Facebook and Twitter.

Having said that, we all seem to have two accounts in real life as well, prior to social media.  When I was younger, I was usually a different person in a school setting, than I was with my school friends, than I was with my sports friends, than I was with my family.  Sorry mom and dad, you usually got the worst part of me.  This has changed slightly since I’ve aged but I still act differently depending on my social setting.   Social platforms are an updated, real-time way to connect with your “friends” depending on who you share your content with.  Although largely debated, it has also been said that social media has increased the number of people that struggle with mental health.  However, could it be argued that there has always been a large number of people that struggle, it is just more exposed through platforms such as these because it reaches more people faster and can be viewed by more at once?  It can also be said that more support systems for those who struggle with mental health are more available and accessible due to social media.

(said sarcastically) “Who takes a picture without a filter anymore?”
– Alec Couros

To add more to the multiple identities portrayed on social media, there are other pressures put on kids to have the best device and to have all the apps in order to feel like they belong.  The types of peer pressure remain the same, but it has changed with how it is communicated.  Cyberbullying has been a common term due to relentless texting, tagging in posts, and trolling.  It’s hard to sort out friends and “friends” in person let alone online.  In addition, the ridiculous challenges that are posted online range from funny to dangerous, such as the Tide Pod Challenge.  These psychologically manipulated situations that are often publicized push kids into unfavourable situations.  Even though one may think these are bad, the evidence of the thousands of others trying it themselves is hard to ignore.

Parents fit into this category of pressure as well.  Keeping up with the latest technology, apps, and overall management is difficult.  Kids always asking and sometimes getting cell phones at younger ages and engaging in social media without a so-called “driver’s license” is a situation that occurs more often than it should.  Sometimes parents relieve the pressure put on by their child in hopes that their kid doesn’t get socially ostracized.  I know my husband and I have many discussions with our friends who have kids and our opinions, approaches, and thoughts about cell phones and app usage don’t always align, and this makes me second guess if we’re doing the “right” thing to help ensure our kids are going to eventually be digitally wise participants.

This takes me to my last and most important point.  It is unrealistic to shut yourself or your kids from social media as it has a huge presence in how we function every day from general communication via texting/emailing to financial management and organizing life’s events.  However, it is realistic to teach digital citizenship.  It is our duty as educators to teach these skills within our current context because we are living in it and are a part of it every day.  In my mind, it’s really no different than teaching financial literacy.  Not only that, we need to educate people in general, not just parents so that we can be role models for our youth.

Interestingly enough,  I came across this resource that my school division has purchased a license that gives teachers a tool to teach digital literacy, among other resources that are already available online.  It is called Media Smarts and has individual interactive scenarios for kids to work through at different age levels.  The areas and promotional videos are:

I look forward to diving into this, first with my own children!

Within the topics we have and continue to explore, I tend to reflect back on Neil

Postman’s “Five Things We Need to Know About Technological Change”.  This website asks some thought-provoking questions related to each of the five things he mentions.  It’s worth a look to put into context how social media impacts our schools and society and how we may start to add the counter-narrative to the social media controversy.

Digital connectivity is here and is continually growing in importance. Technology is facilitating digital classrooms, connecting us in online boardrooms, and keeping us in contact with friends, family and colleagues. Even long time competitors are coming together to meet needs during the pandemic.

How we can choose to spend time our devices need to be directed to more healthy ways.  Changing our online behaivours from numbing our fears and anxieties to connecting, creating, critical thinking, communication, and collaboration will give us more mindful, positive experiences.

2 thoughts on “The Social Dilemma with Social Potential”